I believe every one of us has dreamt about being under a movie-scene like waterfalls and swimming under its sprinkling warm water while the sun rays create a majestic rainbow above. Well Krka National Park is then the right place for you.

Krka national park is Croatia’s second most visited national park with around 1 million visitors annually, just after Plitvice lakes, but their beauty equally matches. In 1985 this area was declared as National park and it covers the area of 109 km², while the river length itself is 73 km. It is situated in the heart of Dalmatia, close to the town of Šibenik. 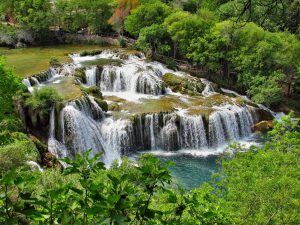 Most of the people visit Krka on a day trip from Split, whose offer is immense as many tour companies offer it. What you should know is that they all don’t have the same itinerary and they visit different places. So here is what you should know.

The highlight of river Krka is its last and the largest waterfall – Skradinski buk, Europe’s largest travertine cascade system. It is also the place from the introduction of this blog and synonym for Krka National Park (picture below). You can reach it either by 20 min boat ride from the picturesque town of Skradin or by walk from Lozovac – the main National park entrance. Be prepared for long queues in Skradin, especially in high season, therefore my advice is to take Lozovac entrance which is where all the tour buses enter too.

Krka National Park however is more than just Skradinski buk waterfall. Half an hour bus ride north is an incredible view of island Visovac, a man-made islet of peace and prayer situated in the heart of the Visovac lake, which is home to a 15th century Franciscan monastery where monks still reside. Another 15 minutes to the north, you can reach Roški waterfall. This hidden gem is especially interesting because of its small cascading falls called the “necklace” and lush green nature around it.