The picturesque canyon of the Neretva River, the turquoise artery of Herzegovina, begins with a truly special place: the village of Počitelj. Built in the 15th century as a military stronghold by the founder of Herzegovina, Herzog Stephen Kosača, it was conquered by the Turkish Ottomans in 1471.
Počitelj offers more than just a photo-stop on the way to Mostar. Take Počitelj as sort of an appetizer, preparing your heart and mind for the main course, the explosion of impressions, flavors and scents of Mostar, Herzegovina’s capital.
Situated some 30 kilometers south of Mostar, the village of Počitelj looks like a large amphitheater overlooking the river. The domes of the mosque, hammam and the medressa are reminiscent of the Neretva and its unforgettable color.

The cobbled streets invite you on an exciting climb to one of two fortresses dominating the landscape. As you pass by the stone houses typically surrounded by high walls and grape wine pergolas providing shade for the few locals who still live there, street vendors will charmingly invite you to buy some of their fruits – figs, cherries or almonds. Along the way, very special trees will add to this atmosphere of the Middle East in the heart of Europe – wild pomegranates. The bright red pomegranate juice can be purchased from the nice old ladies, patiently sitting in front of their homes, proud to be able to greet you in your native language. 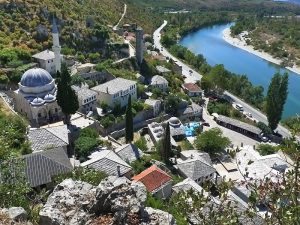 In this stressful world we live in, your short visit of Počitelj will hopefully remind you how good it is to sometimes just stop and observe life for a while.