To be honest, I had never found it necessary to walk around the Dubrovnik city walls. As a local, born and raised in that ancient city, I thought that walking its shady streets, being familiar with its hidden corners and seeing the resplendent palaces was all there was to know about Dubrovnik. Wrong!

As a mandatory part of my training to become a licensed tourist guide, I was eventually REQUIRED to climb up to the Wall and take the entire 1.5 hour walk. WOW! I couldn’t believe my eyes!
Everything looked so different, so new, so special. The sea of roofs hoovering over the Adriatic Sea.  The constant exchange of sights and sounds. Colors –  white, blue, orange, green – were almost palpable.  Since then, I have always recommended the tour of  the Dubrovnik Walls to every visitor of “The Pearl of the Adriatic”. It’s a MUST DO thing in Dubrovnik. 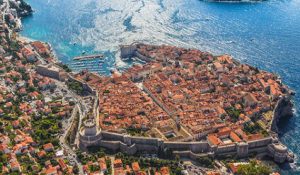 However, there was one other discovery that likewise amazed me. As a child, I heard of a legend that said that “once upon a time” all people coming to Dubrovnik had to bring over a stone that could be built into the city wall. Years later, during my studies, I coincidentally found a history book that said that the story might be true after all. 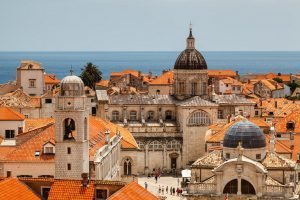 I decided to do some personal research and went to the Dubrovnik Archives. After some negotiations with the nice lady over there, I was finally allowed to browse through an old book made of thick leaves that looked like paper. I tried to read it, but, to my horror, wasn’t able to, because it was hand-written in Latin. I was so disappointed. And then, I turned around and saw an acquaintance of mine, who studied Latin at Oxford. “Please, can you help me?”- I asked. “Of course I can!” – He replied.
And here’s what the old book said: “Die X Martii 1462. Captum fuit de dando libertatem officialibus murorum quod possint angarizare homines venientes in civitatem per portam Plociarum ad portandum de petris pro fabrica murorum prout melius ipsis officialibus videbitur non distruendno macerias nec aliter faciendo damnum.”

What does that mean? Try to decipher it yourself and let me know about it!