Trogir is a historic town and harbour on the Adriatic coast in Split-Dalmatia County, Croatia. The historic city of Trogir is situated on a small island between the Croatian mainland and the island of Ciovo. Since 1997, the historic centre of Trogir has been included in the UNESCO list of World Heritage Sites. 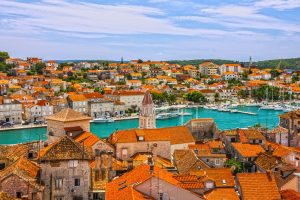 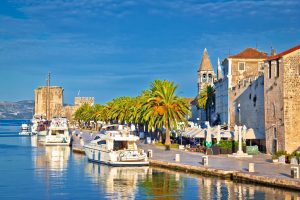 Most of the town walls, once used as a protection are preserved, forming, in the 13th century, the old center of Tragurium. The Kamerlengo Tower and St. Mark’s Tower still dominate among the walls.
Sea entrance to the town is the South Town gate, huge wooden gate, reinforced with pins, preserved from 1593,  proved by the sign above it. The North entrance is through reneissance Town gate guarded by St. Ivan Trogirski, protector of the town. 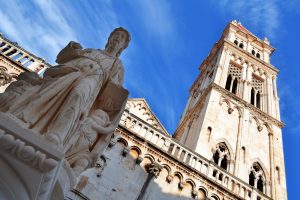 St. Sebastian’s votive church is  built on the main town square in the middle of the 15th, as a gratitude for saving the town from plague. Instead of the church bell there is an impressive tower with town clock.
Town lodge, next to the votive church, was once a public object, shelter, meeting place and a court room. Rich reliefs were made by Nikola Firentinac and Ivan Mestrovic.
Small and big Cipiko palaces are set of buildings (palaces) built by a prominent family Cipiko from Trogir. Gothic trifora, the work of Andrija Alesi, adorns the front of the big palace, doors were carved by Ivan Duknovic and the south portal is work of Nikola Firentinac.
Town Hall was first mentioned in the 13th century and got back it’s renaissance sharm after reconstruction during the 19th century. 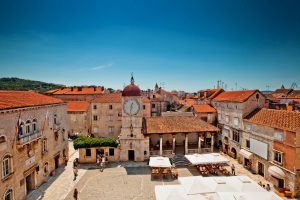 Town musem is located inside the Palace Garagnin – Fanfogna. It used to be a residential and economic complex of very influential and rich family of Trogir, with romanesque and baroque characteristics.
While walking through the narrow streets of the town you can come across Kairos, God of lucky moment… According to legend, whoever manages to grab his curl will have lucky moments of eternal beauty. In case you do not find it, this bronze relief and symbol of Trogir is the most valuable part of St. Nicholas monastery collection. 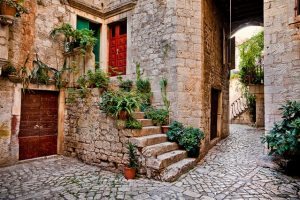 Discover more about Trogir, its history and hidden stories with us on our Trogir walking tour.