Why citizens of Split keep saying "There is no place like Split”?

Split is economic and administrative center of Middle Dalmatia and the second largest city in Croatia.
It is also the jumping-off point for exploration of the coast and islands of the beautiful Croatian Adriatic. 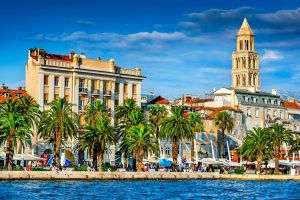 The story of Split is already 17 centuries old, dating to the time when Roman Emperor Diocletian decided to build his Palace right on the peninsula near the great Roman city Salona, where he wanted to spend the last years of his life. During these 1700 years the Palace slowly turned into a city, which to this day lures with its rich tradition, glorious history and beauty of its natural and cultural heritage.
Split’s growth became particularly rapid in the 7th century, when the inhabitants of the destroyed Greek and Roman metropolis Salonae (present-day Solin) took refuge within its walls. The lovely ruins of Solin outside the city can still be explored today. 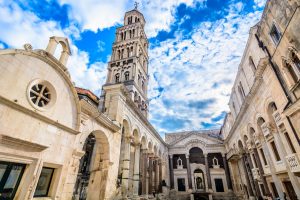 Diocletian Palace and the entire historical core of Split have been on the World Heritage UNESCO list ever since 1979. The importance of Diocletian’s Palace far transcends local significance because of its extraordinary preservation and the buildings of succeeding historical periods built within its walls, but also because the city and its Palace continue to live a full life. All historical layers from the old Rome, middle ages till today are still visible and alive in this structure. In the Middle Ages, Split was an autonomous commune. Many of Split’s historical and cultural buildings can be found within the walls of Diocletian’s Palace. A walk through the ancient city takes you through time, along the great examples of ancient architecture like Peristyle, the middle aged Romanesque Church and Gothic Palace, Renaissance portals of the noblemens houses, Baroque facades and modern architecture superbly merged in the rich heritage.
In addition, numerous museums like Archaeological Museum and Meštrović gallery, the National Theater, and old churches and other archeological sites in the Split region make it an important cultural attraction. 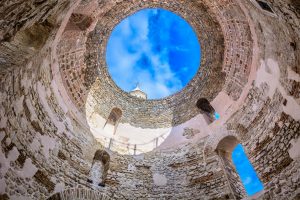 Why citizens of Split keep saying “There is no place like Split”? Local inhabitants sit in the same cafes, restaurants, shop in the same stores as tourists, giving them the impression that, by arriving to Split, they became a part of the city and its rhythm. The entire social life of the town reflects on the Riva (waterfront), where every guest should endeavor to have his coffee alongside noisy, temperamental folk of Split.

Split is much more than glorious architectural scenery. Split is also a venue for excellent gourmet and vine experiences, numerous cultural happenings like film and theater festivals, exhibitions, excellent museums and concerts, a city which offers eclectic modes of entertainment starting with numerous clubs and bars, through street festivals to events such as Ultra Europe Festival visited each year by up to 100 thousand young people from around one hundred countries of the world. Split with its sport results is something only a handful of cities of similar size around the world can boast about as it is the home of a dozen Olympic medal winners as well as other sports medals. 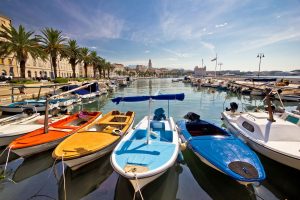 When you tire of the city bustle, there’s Marjan, hill symbol over the city, with its forest, jogging trails, mountain climbing and biking, recreational terrains, but also the ancient churches where the late citizens of Split sought spiritual peace. Also very unusual to find in a city the size of Split are the numerous beaches with extraordinarily clean sea, from the well known Bačvice to the stone secluded oases’ all around Marjan. 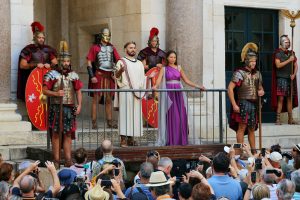 Split is a busy port, with an international airport and regular ferry services to the nearby islands, the north and south Adriatic, Italy and Greece. The merchant and passenger ships of the Split shipyards may be encountered in almost all seas of the world. In addition, the city has large chemical works, metallurgy plants, and workshops for the production of solar cells. The fertile fields around Split represent a good base for agriculture, while cultural monuments, superb landscapes and unparalleled seascapes make it a tourist’s wonderland. Split is also a university seat and host to numerous scientific institutions.

To find more about Split history and attractions join us on our Diocletian’s palace walking tour.