"The Small Lakes of Plitvice"

Rastoke is the historic center of the Croatian municipality of Slunj known for its well-preserved mills and little waterfalls along the Slunjcica river. In its formation, Rastoke serves as an introduction to the Plitvice Lakes and therefore often being referred to as “the Small Lakes of Plitvice”. In contrast to the Lakes Rastoke features a three hundred-year old village with houses and watermills. 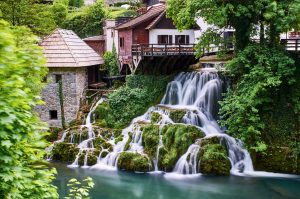 Rastoke is a place of native ecologic and ethnographic significance due to its symbiosis of natural and civilizational features. Due to its rich heritage in 1969 Rastoke was registered as an immovable cultural monument in the Regional Institute for Protection of Cultural Monuments in Zagreb.

Rastoke is particularly interesting for its civilizational and traditional features. Here, one can observe a symbiosis between the fantastic creations of nature and human technological achievements dating back several centuries, the mills of Rastoke. Innovative at a certain time in history, for the first time primitive machines had not been driven by the strength of humans or animals, but by water power.
All along the travertine barrier, houses and mills have been built in the unique style of this region, a combination of the architectural styles of the Dinaric and the Posavina region. The ground parts of the houses are made out of travertine, while the higher parts consist of wood. The roofs are made by shingle or tiles. Due to high concentrations of calcium that regularly sediment at the openings between the cellar stones the ground parts have been covered by a layer of sinter. Thus, water cannot not run into the houses even at high water levels. 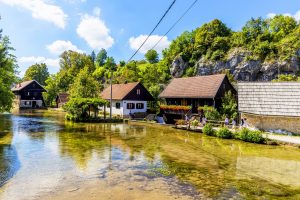 Apart from milling, the people of Rastoke have also been known for their weaving of flax and hemp. The plants were grown by local people, soaked into the water of the Korana and then used for weaving. This was one of the main occupations of women, particularly during the cold winter months. The traditional costume of Slunj and Rastoke consists of these materials.

The region offers many activities for recreation, such as swimming, canoeing, rafting, fishing, hunting, mountain biking, hiking, riding, or even the visiting of caves (e.g. the subterranean limestone Caves of Barac at nearby Rakovica).

As a place of autochthonous ecologic and ethnographic significance, Rastoke has the potential of becoming an inland tourist center characterized by its traditional architecture, gastronomic pleasures and specific local cultural customs.