One of the most important, and best preserved ensembles within the city walls in the regio

Pocitelj is a small walled town in the Capljina municipality, in Bosnia and Herzegovina. It is known mainly as the mainstay in the defense against the Ottomans.

The walled town of Pocitelj evolved in the period from the 16th to the 18th centuries. Its significant strategic role from the 13th to 17th century gave its inhabitants the power to build one of the most important, and best preserved ensembles within the city walls in the region.
The historic urban site of Pocitelj is on UNESCO Tentative List for Bosnia and Herzegovina.
Recent reconstruction has returned the town of Pocitelj to its original form.
Artists from around the world gather here to paint, among other things but importantly, the shiny red pomegranates and figs that grow in abundance on the hills of Pocitelj. 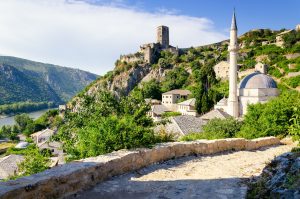 The fortress in Pocitelj was built by King Tvrtko in 1383 and it had a strategic role in controlling the passage to the sea through the Neretva valley,  as the main stronghold against Turkish conquest in Neretva River Valley. After the Ottoman conquest, during the 15th and the 16th century, the settlement gained features of the Oriental-Mediterranean styles, with numerous very significant architectural structures.

Today, the historical town of Pocitelj, built under the fortress, has an oriental style and as such is completely in the function of tourism and cultural events.

Check out our Mostar and Kravica Waterfall group tour or Mostar and Herzegovina highlights private tour and explore this charming historical town with us.