Omis is a small town and harbour in Central Dalmatia located between Split and Makarska, situated in the mouth of the Cetina river and surrounded with massive gorges. In the past Omis was notorious becuse of the pirates of Omis whose ships were a centuries-long symbol of retaliation, courage and strength. The evidences of proud and turbulent Omis history can be found on every corner of the Omis Riviera. Omis churches and Omis fortresses are silent stone reminders of the power and the might of infamous Omis pirates. Today, Omis is one of the most beautiful places of Croatia’s Adriatic coast. Situated in the heart of Dalmatia, Omis Riviera offers everything you need.

The mouth of the Cetina river was first permanently inhabited in ancient times, more than 2000 years ago, and it is believed that the origins of the present-day Omiš are to be found in the small settlement of Oneum, which lay at the  foot of the impressive mountain guarding the town from the north – Omiška Dinara.
Over the centuries the local people started building their houses closer to the sea, and for a very good reason. The inhabitants of medieval Omis were pirates! 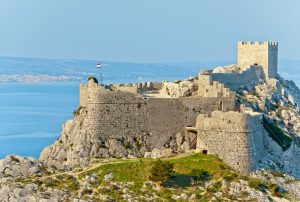 Throughout the 12th and 13th centuries the pirates of Omis ruled the seas from Omis to Dubrovnik, and all ships  sailing by this small town at the Cetina mouth were  forced to pay tribute for free passage or risked enaging in a battle against the ruthless pirates of Omis in which only few came out the winners.
Lead by the famous dukes of the Kacic family, the pirates of Omis thus ruled a large part of the Adriatic for almost two centuries. As time went by, the pirates of Omis grew so powerful that in 1221 Pope Honorius III organized a crusade against them, in which his army was defeated.  However, no more than 60 years later, the Venetians, again under the Pope’s order, launched yet another crusade against the infamous pirates from the Cetina river, this time with more success. It was one of the few, but at the same time a crushing defeat of the Omis pirates in naval battles. Not long after having been defeated by the Venetians, the dukes of the Kacic family fled the town, and their power became significantly diminished. Although they continued practicing piracy, the inhabitants of Omis increasingly started looking for alternative sources of income in agriculture and fishing.

In the 15th Omis officially came under Venetian rule and the town itself developed into an important administrative and military stronghold and was surrounded by high walls.
It was precisely during the Venetian rule that Omis acquired its present appearance and architectural form. Since  the town developed within the boundaries of its high fortifications, the architects had limited space for wide alleys and grand houses. The alleys of the old town were therefore quite narrow, and intersected only by numerous squares and piazzas which were the venues of public life in the early Modern Period.

However, the town gradually grew too big and overpopulated to remain confined within its large walls. Not long after the fall of the Venetian Republic, at the beginning of the 19th century, the town planners decided to pull down the medieval town walls, and the Eastern town gate, along with the Turjun tower overlooking the main street of Fosal, remained as the sole reminders of the great old “giant” that guarded Omiš from invaders throughout centuries.

In the following period Omiš, along with most of Croatia, went through two Yugoslav states, and in 1991 finally concluded it turbulent history by becoming part of the independent and autonomous Republic of Croatia. 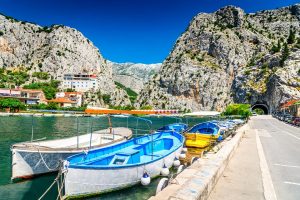 Numerous beaches and bays, rich vegetation, fresh air and crystal blue sea make Omis Riviera the perfect place to ecsape from the stress and rush of modern life. For those that prefer active holidays, Omis Riviera is a perfect destination. Rafting on Cetina River, free-climbing, scuba diving, trekking, canyoning and windsurfing are just some of the activities that Omis Riviera has to offer.

Omis is filled with restaurants, wine-cellars and caffe bars. Mediterranean cuisine, with traditional Dalmatian food and it’s thousands year tradition will give you the real taste of Mediterranean. Omis Cultural Summer, Festival of Dalmatian Klapas, Pirates Nights and many other musical, theatrical and gastronomical social events make Omis perfect place to experience not only the beauty of Dalmatia, but also beauty of it’s soul.

The evidences of proud and turbulent Omis history can be found on every corner of the Omis Riviera. Ancient town of Omis, Omis churches and Omis fortresses are silent stone reminders of the power and the might of famous Omis corsairs.

During the Middle Ages Omis was infamous for its corsairs (pirates) whose ships brought fame to them because they were built for attack and fast return into the mouth of the Cetina River, protecting the town from foreign invasion. At a very early date neighbours of the Corsairs of Omis, the highlanders of the Poljica Principality, became their allies, enabling them to harass the sea trade without fear of a sudden attack by land.
In spite of various alliances against Omis pirates, including the Pope, Venice, Split and Dubrovnik, it was not until 1444 that Venice managed to capture the old pirate town. It happened owing to the approaching Turkish force that made the amber way dangerous, almost impossible. It also meant the decline of the power of the pirates. Deprived of their prey, they lost their strength and the reason for existence. The danger from the Turks became more and more serious. Yet, despite the fact that they conquered the nearby hinterland, Omiš had never fallen into their hands.