Kotor Bay is the deepest natural fjord-like bay in the Mediterranean Sea, and the scenery around it (including the steep mountains which come almost straight down to the waters edge) is spectacular. The old Mediterranean port of Kotor is surrounded by fortifications built during the Venetian period, it is a city of traders and famous sailors, with many stories to tell. Visitors are attracted both by the natural beauty of the Gulf of Kotor and by the old town of Kotor. 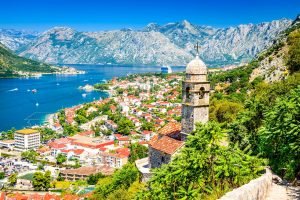 Kotor is a coastal town in the northern part of the Montenegro coast on the Adriatic Sea. It is situated in the triangle which is bounded by the sea, river Skurda and hill Saint Ivan, on top of which stands the fortress of San Giovanni. The city of Kotor has three doors. The door to the sea are rebuilt in Renaissance style in 1555., and they lead to the city promenade and the coast. The door on the river side were rebuilt in the same style in 1540., to commemorate the victory over the fleet Hajredin Barbarossa, leading to Risan, Herceg Novi, while doors Gurdic were re-established in the late seventeenth century, leading to the Trinity and the intersection of Cetinje – Budva. 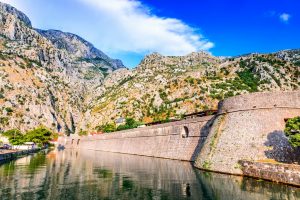 The city has changed many government and administration in its long history.
It was ruled by the Illyrians in the third century B.C. Afterwards, it was conquered by the Romans who ruled the town until the fall of the Western Roman Empire in 476 year. After that, Kotor became part of the Eastern Roman Empire, Byzantium, and it remained within it until 1185. The Byzantine rule in Kotor was interrupted in mid of the 11th century by administration of the Doclean-Zeta dynasty Vojislavljevic. Byzantine rule was restored in the 12th century until 1185 ,when Kotor became part of Raska – medieval Serbian state ruled by the dynasty Nemanjic. Serbian administration lasts up to 1371., when the city was took over by the the Hungarian-Croatian king Ludovik I. The first period of Austrian rule over the city was from 1797. -1805. Afterwards, the city was controlled by the Russians from 1806. until 1807. The French ruled Kotor from 1807.-1813.
After the First World War Kotor entered into the Kingdom of Serbs, Croats and Slovenes, and since the Second World War in the composition of the Republic of Montenegro, one of the six republics of the Socialist Federal Republic of Yugoslavia. By disintegration of SFR Yugoslavia, Kotor has remained in SR Yugoslavia. Since 2006. Kotor became part of an independent Montenegro.

A large number of political administration, along with sailing and trade, were favorable to Kotor become the meeting place of many cultures. Kotor has accepted the EU Eastern and Western cultural forms and united them in his own way. Also, Kotor has developed and maintained the spirit of harmonious coexistence of its Catholic and Orthodox inhabitants, which is the basis for spiritual and cultural interaction. 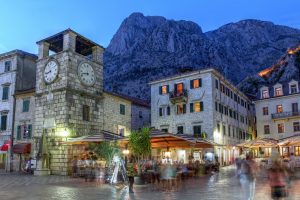 Kotor has developed around Stari Grad, the city’s old town and best known landmark, which is UNESCO World heritage site, where the Kotor history, culture, and tradition are being preserved. The old town of Kotor has a great number of monuments of the medieval architecture: churches, cathedrals, palaces, and museums complemented with the multitude of narrow streets, squares, and markets.

Through the entire city the buildings are criss-crossed with narrow streets and squares. They contain very important monuments like: St Tryphon’s Cathedral, the Church of St. Luke in 1195., the church of St. Mary, rebuilt in 1221., the church of St. Paul from 1266., the church of Santa Chiara, the Franciscan monastery, which keeps a library of about 20,000 books, 50 incunabula, the earliest printed books to 1,500. year. Carnivals and festivals are organized each year to give additional charm to this most beautiful city of the Montenegrin littoral.

Read more about our tour to Kotor: Dubrovnik and Montenegro 3 day tour!