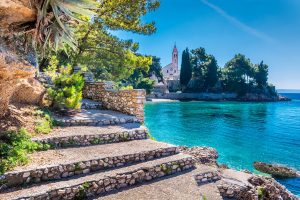 There has been evidence found on the island to evidence that the history of Brac stretches back to Bronze and Iron Ages. At that time the Illyrians named the island Brentos (meaning stag) whilst the Greeks later gave it the name Elaphusa. Like much of Dalmatia, the island of Brac also subsequently became part of the Roman Empire although little evidence of the Empire can be seen today.

The Croatian people found their way to Brac in the 7th century, with the island becoming part of the Croatian Kingdom of King Tomislav in the 10th century. In the following centuries, Brac flipped between rule by the Venetian Empire and the Croatian Kings as well as the Croatian-Hungarian Empire. Bosnian King Stjepan Tvrtko I took control of much of the Dalmatian region – including Brac – in 1390, although his death the following year then saw Sigismung, King of Hungary, take control. In 1420, the island finally became part of the Venetian Empire for a longer time, with the island governed by a Count nominated by the Venetian Senate.

The island’s spell under Austrian rule saw economic and cultural improvements, with Supetar established as the main administrative center of the island in 1827. Brac’s population peaked at the beginning of the 20th century, following which was a period of significant emigration (largely due to a vine lice epidemic affecting much of the islands grape crops, causing many winemakers to suffer) with many leaving for Latin America.

After becoming part of the Kingdom of Serbs, Croats and Slovenes after World War I, Brac was occupied by Italy (in 1941) and then by German forces in 1944, although their defeat in July of that year meant the island was freed from their control. After World War II, as with the rest of Croatia, Brac once again became part of Yugoslavia until Croatia declared its independence in 1991.

The largest places are Pucisca and Supetar. Major farming products are olive oil, wine and fruit (sour cherries and almonds); chief occupations include also livestock breeding and fishing. Fish canneries are located in Postira and Milna.

Composed primarily of limestone and dolomite, the quarries of the island of Brac have been a source of stone for building decorative stonework for centuries. The old Romans have known its quality and used this very stone to build cities, amphitheaters, temples, palaces and graves all over Dalmatia.
Major quarries, where the famous Brac building stone is excavated, are located near Pucisca, Selca, Postira, Splitska and Donji Humac (this kind of building stone was used in the construction of the White House in Washington and the Palace of Diocletian in Split).

The two main tourist centers, Supetar and Bol, are quite different: Supetar is pleasant if unassuming, while Bol revels in its more exclusive appeal with the long pebbly beach Zlatni Rat that extends lasciviously into the Adriatic and adorns 90% of Croatia’s tourism posters.

The most outstanding cultural monument of Brač is the monastery known as Pustinja Blaca (Blaca Desert), built far up in the hills by Croatian Glagolitic monks in the 15th century. The monastery, where a mystic and contemplative atmosphere prevails, nas an old astronomical observatory and a museum collection.

Explore this island and spend some time on one of the most beautiful beaches with us on our Zlatni rat beach on BraČ island and Hvar town tour.