Hidden deep in the Dalmatian background, behind the Biokovo Mountain, at the tri-boundary of Bosnia and Herzegovina with Dalmatia, Imotski is characterised by brick architecture and a Mediterranean climate and is only 50 km away from the sea. 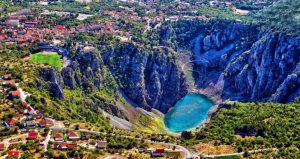 Imotski was first mentioned in 950 by the Byzantinian emperor and historian Constantine Porfirogenet in his literary work De administrando imperio. The city is dominated by a castle from Ottoman times called Topana which was built in the 10th century and had an extraordinary strategic significance in the past.
Inside the fortress, there is a votive church dedicated to Our Lady of Angels, the patron saint of Imotski.               Being well-preserved it dominates over the town and offers a magnificent view of the town and Blue Lake.
The Imotski lakes are a natural attraction – Crveno jezero (the Red Lake), is the deepest Karst lake in Europe, and Modro jezero (the Blue Lake), a favourite bathing spot for the Imotski people, owes its name to its unique blue colour.

Blue Lake is a karst lake and like the nearby Red Lake, it lies in a deep sinkhole possibly formed by the collapse of an enormous underground cave. The total depth from the upper rim is around 220 meters, while water depth varies with season.  This karst formation is a amazing place to watch an entertaining soccer spectacle of the local soccer teams when the lake dries out. 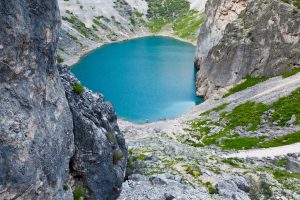 Just about 1,5 km from Blue Lake there is Red Lake (Crveno jezero), the deepest Karst lake in Europe. This depression is 528 m deep, whereby the depth of the water reaches up to 300 m with the bottom under the sea level. It is known for its numerous caves and remarkably high cliffs, reaching over 241 metres above normal water level and continuing below the water level.  It gains its uniqueness from the color of the surrounding cliffs which are reddish brown in tone. 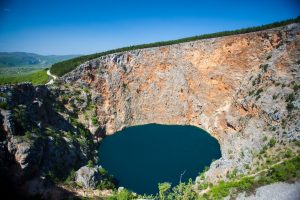 There are several legends connected to the origin of the lakes in Imotski.

A great poet Tin Ujevic recognized a beuty of Imotski and was was written about it in his poem „A Pilgrimage  through Zagora“.