Bosnia and Herzegovina's most recognizable landmarks

Old Bridge (Stari Most) in Mostar

Mostar city, known as “the window to the Orient” is the fifth-largest city of the Bosnia and Herzegovina Federation and the cultural capital  of the Herzegovina region. Mostar is situated on the Neretva River and was named after the bridge keepers (mostari) who in the medieval times guarded the Stari Most  (Old Bridge) over the Neretva. The Old Bridge, built by the Ottomans  in the 16th century, is one of Bosnia and Herzegovina’s most recognizable landmarks. 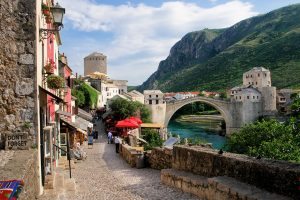 The Old Bridge (Stari Most), was erected in 1566 on the order of Suleiman the Magnificent, the Ottoman ruler, and was designed by Mimar Hayruddin.
The bridge has always been the symbol of the town. During the Bosnian war the town and bridge have been badly damaged and through combined efforts with the international community has been completely rebuilt and opened again in 2004.
This magnificent architecture achievement crosses the river Neretva and connects two parts of the city. Visitors now can often see local men jumping from the bridge into the aqua green river Neretva, and the jumps became a town`s tradition.
It is the first monument in Bosnia and Herzegovina listed on UNESCO’s list of cultural heritage. Mostar has architecturally noteworthy buildings in a wide range of styles.
The Old Bridge area, with its diverse architectural features, is an outstanding example of a multicultural urban settlement.